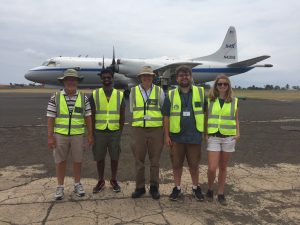 Aug. 2017: Greg McFarquhar and his grad students Siddhant Gupta & Rose Miller are seen  with others in front of the NASA P-3 aircraft in Sao Tome, Africa during ORACLES, a project designed to sample the impact of  biomass aerosols on extensive stratocumulus decks over the SE Atlantic Ocean.

November 2017: Prof. McFarquhar is seen on board the Aurora Australis in 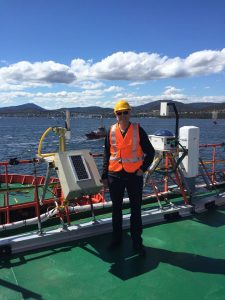 Hobart, Australia just before it departed to Antarctic for its first cruise as part of the Measurements of Aerosols, Radiation and Clouds over the Southern Ocean Experiment (MARCUS) funded by the Department of Energy. Prof. McFarquhar and several of his students are headed back to Hobart in January 2018 to collect a set of data on clouds, aerosols, radiation and precipitation over the Southern Oceans using the National Science Foundation/National Center for Atmospheric Research G-V aircraft during the Southern Oceans Cloud Radiation Aerosol Transport Experimental Study (SOCRATES).